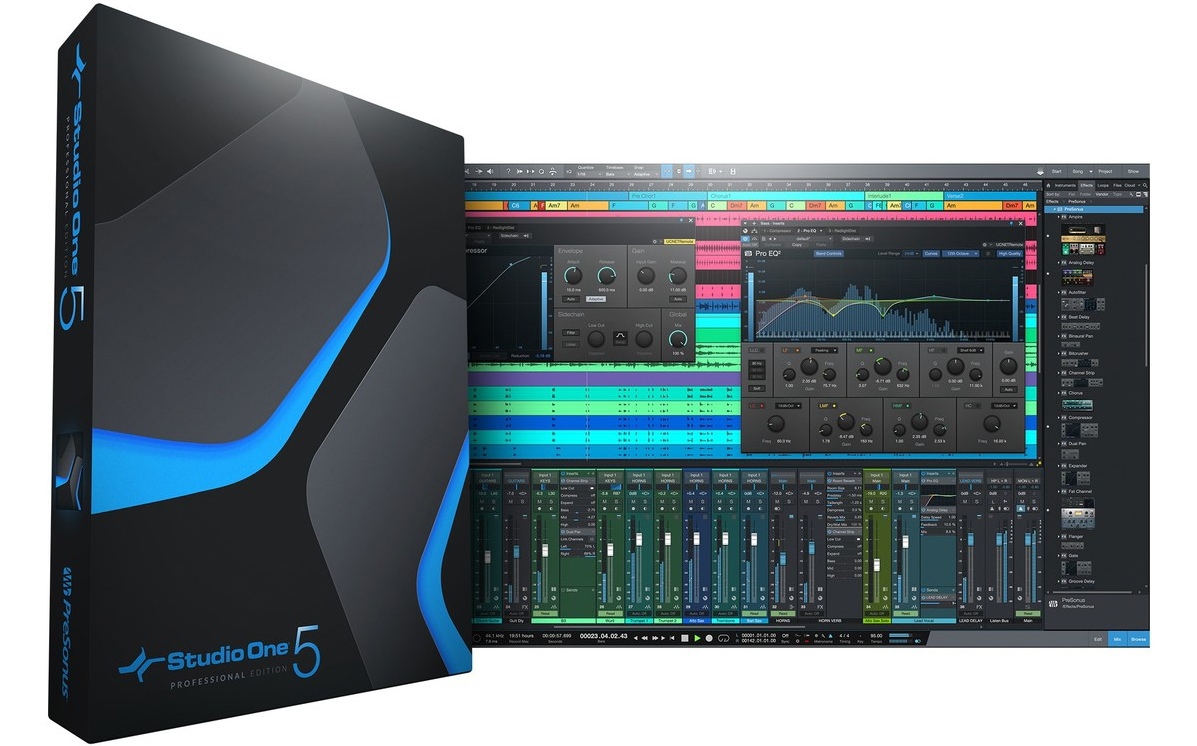 PreSonus Studio One 5 adds a lot of cool features for performers, composers and producers Great DAW just got better. PreSonus has announced the upcoming major update for DAW PreSonus Studio One 5, dedicated to the 10th anniversary of the music recording software. According to the developers, the fifth version of the popular program "combines user requests and our sense of innovation." Among the new features of the program are new features that will be useful to performers, composers and producers. For example, performers will receive a new Show Page workspace, and composers will receive an updated Score Editor. In addition, all stock plugins in Studio One 5 will receive a completely new interface designed to make interacting with them easier and more efficient. It will not do without new treatments and effects. The program will also include synchronization with MIDI timecodes, a special bus for listening to the Listen Bus and new AUX channels. The developers promise to add envelopes for clips, Keyswitch articulation and extended scenes in the mixer. What's New in PreSonus Studio One 5 A new workspace for artists, Show Page, combines the ability to play back tracks and work with virtual instruments in a single window. Channel Strip effect chains, mixdowns and virtual instruments can be exported directly to the Show Page. Setlists will also appear here with the ability to change the order and skip files. Show Page will get its own full-screen window with an adaptive interface and controls that change the scene in real time. According to the developers, live sets in the new mode will become simple and flexible, regardless of whether you are working with backing tracks, effects or virtual instruments. Especially for composers and arrangers, the developers have created a new Score View mode in the music editor. The mode repeats the one in the PreSonus Notion score editor. Score View can run in a separate window or split screen with Piano View and Drum View. This allows users to use Score View on one track and Piano/Drum View on another to independently edit the score. Score View is equipped with basic musical symbols. According to the press release, notes can be entered manually, in real time or in step recording mode. As for native stock effects and plugins, PreSonus Studio One 5 will offer an updated interface for all processing. Externally, the plugins will become cleaner, and will also receive a light and dark theme, which you can switch between on your own. In addition, all plugins will acquire a number of new features. For example, dynamic effects in Studio One 5 received sidechain inputs. Filter plugins have learned to filter the signal on sidechain inputs, which gives more control over the sidechain signal. Processings with the Drive parameter have acquired a State Space Modeled section for natural analog signal saturation. Equalizer Pro EQ received a linear-phase cut filter, a new option for displaying information about the signal, as well as input and output signal level indicators with additional settings. Especially for producers, the developers have expanded the functionality of scenes in the mixer. The DAW now allows you to save snapshots of all mixer settings at any time, with several options for recalling snapshots. For example, producers can pull the settings of only individual tracks from each shot, and combine them with the current settings of the tracks in the project. The mixer also has a special Listen Bus, which allows you to monitor the signal through an independent output channel. The same bus can be used to A/B check the mix: users can put any plug-ins on it without worrying about critical changes in the sound of the composition. Other interesting additions include the Clip Gain Envelopes feature, which provides an additional layer of control over the gain applied to an audio clip. According to the developers, the feature is useful for fixing too loud or weak segments of audio files without using dynamic processors. In DAW version 5, AUX inputs will be able to accept external audio sources. Thanks to this, third-party real instruments will work without a separate channel in the project, and interaction in DAW with them will resemble working with virtual instruments. The developers also note that Studio One 5 will learn to record audio in 64-bit WAV, get full support for MIDI MPE and MIDI Poly Pressure, MIDI timecodes. The program will have cross-platform support for hardware graphics acceleration.
PreSonus Studio One 5 Professional v5.5.0 Win/Mac OS 5.5.0 85116 x86 x64
Re-download
Direct URL File Size 527.3MB
If it doesn't download automatically, click Download again. And if the link is broken, please report it in the comments field.
Tags
DAW Mac
Related Article